For Black History Month, the Arhoolie Foundation focuses on some of the interviews, stories, and videos that feature performers from the Arhoolie catalog. These musicians are traditional bearers for many musical styles.  Through their work and songs they express the joy of community, love, and the challenges of injustice and discrimination.  We honor and recognize the accomplishments of all the Black performers in the Arhoolie family and beyond for their foundational contributions to American music. 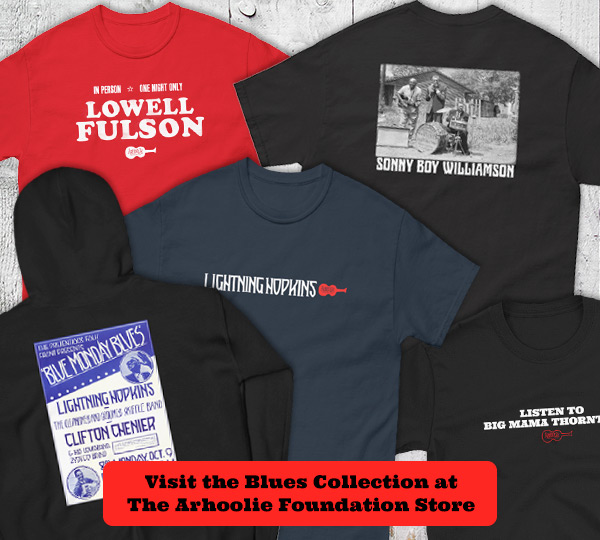 The Adroin family is filled with a long line of Creole musicians.  Amede Ardoin was the first Creole accordionist to make commercial phonograph records in the late 1920s. Amede’s cousin was Alphonse “Boi Sec ”Ardoin, a successful accordion player who joined with Canray Fontenot in starting a band that lasted 40 years. Canray Fontenot was a Creole fiddler who was named a National Heritage Fellow by the National Endowment for the Arts in 1986. “Bois Sec” and Canray were two of the best-known exponents of authentic Creole music and toured the world. “Bois Sec” retired from playing in 1975, but his son Lawrence continued the duo. Lawrence used to play drums in the Ardoin Family band and only switched to the accordion in 1975 after his older brother Gustav was killed in an accident. Chris Strachwitz wrote in the liner notes for Lawrence’s first record for Arhoolie, “in the spring of 1984, I was suddenly confronted by Lawrence Ardoin and the band, playing with incredible unity and spirit.” Lawrence continues to add to the family dynasty as the father of zydeco artists Chris and Sean Adroin. Here Lawrence and Canray play a classic tune at the Ashkenaz in Berkeley, CA in 1988.“Allons Danser” – Lawrence Adroin and Canray Fontenot at the Ashkenaz, Berkeley, CA 6/3/88 ©Arhoolie Foundation 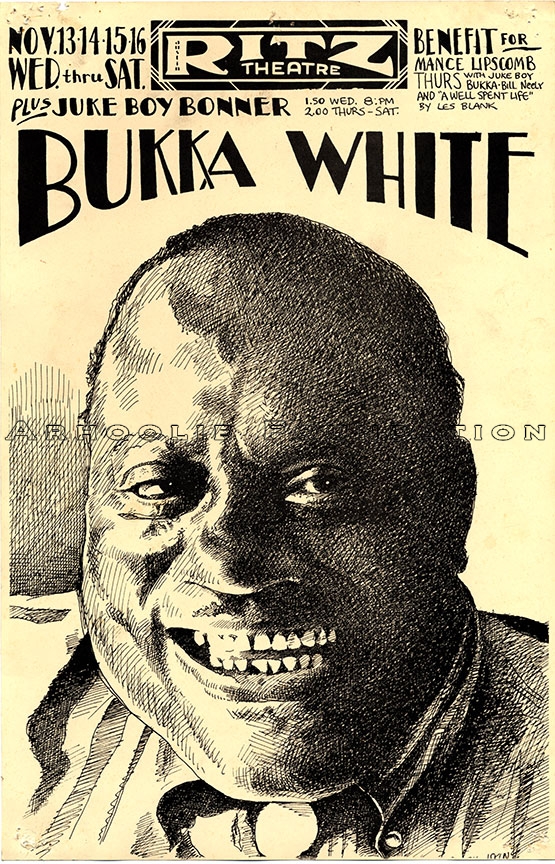 Booker T. Washington “Bukka” White had an overpowering personality.  He was a remarkable improvising blues singer who made up songs on an intensely personal level. He learned his music in the juke joints and honky tonks of the South.

In addition to his powerful Arhoolie release (ARH323), he was interviewed by Chris Strachwitz about his life. Bukka spoke eloquently about his life including his time at the notorious prison in Mississippi where they kept him after his time served because he provided a great service to the others playing his guitar and singing. “I had to burn a guy a little and they gave me a little time down there on Parchman’s Farm. They treat you like you treat yourself. They called me ‘Barrelhouse,’ and I seen better days there than I seen at home. On Sundays girls would come by and take me for a ride – bring me food and cakes. I became famous down there – was of too much service to them to let me go. When I got out I felt like shootin’ somebody else! I was in there when Mr. Lomax came by and I figured it was better to give than receive and so I did some numbers for him.”

“Why Do You Want to Make Me Cry?” – Leo Thomas with Geno Delafose – Geno Delafose Boucherie in Eunice, Louisiana. 10/31/90 ©Arhoolie Foundation

In 1998 the Arhoolie Foundation, with Documentary Arts, produced a video documentary, “Everything But The Squeak” documenting a “boucherie” (butchering of a hog and eating it!) and other Cajun/Creole traditions in the Eunice, La. area. These lively events are where friends and neighbors gather and bring side dishes and desserts to compliment all the meat dishes obtained from the newly butchered hog and celebrate the feast with music and dancing. In October 1990, Chris Strachwitz was invited to attend a boucherie hosted by zydeco accordionist Geno Delafose. In addition to great food there was lots of music.  Here Leo Thomas sings his signature song,” Why Do You Want to Make Me Cry?”, backed by Geno and a cadre of young washboard players.  Leo recorded the tune on the Preston Frank and the Swallow Band album, “Zydeco Volume 2” (ARH1090) which was also released as a single in 1985 (ARH 45-545). 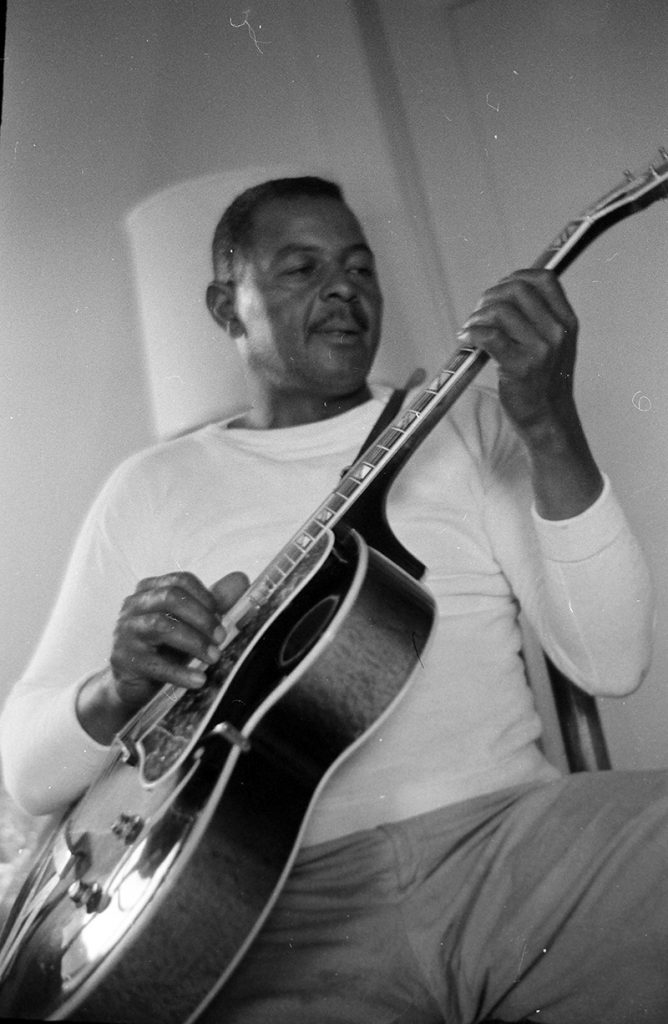 John Hogg was Smokey Hogg’s cousin and a very able musician in his own right. He played with Smokey and recorded for the Octive label in the early fifties.  A decade his recordings ‘West Texas Blues’ and ‘Black Snake Blues’ were part of to the Blues Classics album, “Texas Blues The Early ’50”. Chris Strachwitz met up with him in Los Angeles in 1960 to talk about the “gut-bucket blues.”

To see more rare pictures
and videos from the Arhoolie Foundation Collection,
sign up for our newsletter.