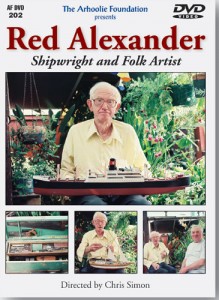 This delightful 30 minute visit with 80 year old Robert ‘Red’ Alexander documents his lifelong passion: ship building (both model and real). By the age of 10 he had discovered the Oakland waterfront and was making detailed wood models of the ships he saw there. In 1934 he joined the Shipwrights, Joiners, and Boat Builders Union – Local 1149, and he worked for the next 46 years as a boat builder, shipwright and dock master on the Oakland estuary. During his time on the waterfront, Red saw the Oakland estuary change from a shallow 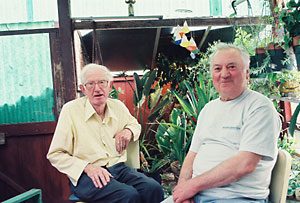 backwater to a modern harbor. With this evolution his work also changed: many of the traditional aspects of the craft were almost lost as the basic materials changed from wood to plastic and steel. But with his models, Red remained true to his beloved wooden boats and ships. Today his kitchen is a studio where he makes intricate models of all types of working ships and boats – tugs, scows, liners, container ships. This moving portrayal of a true folk artist and natural born storyteller is woven through with music and tales of his days as a shipwright. Red is visited by filmmaker Chris Simon and folklorist and fellow union member, Archie Green.