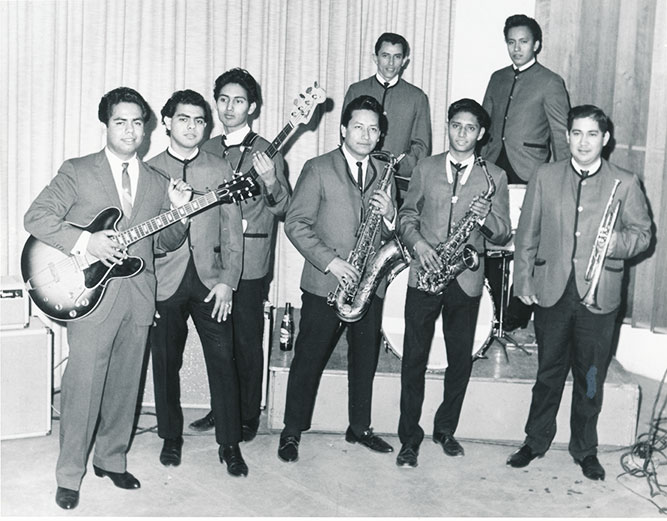 Little Joe Hernández, from Temple, Texas, was born in 1940 and began his career as a musician in the late fifties, trying to break into the surging rock-and-roll market.  His first record, released in 1958, was a two-part rock tune titled, “Safari, Part I & II.”  The group was called “The Latinaires,” later renamed “Little Joe & the Latinaires.”  Finding it impossible to break into the rock-and-roll market, Little Joe turned increasingly to the music favored by Texas-Mexican orquestas (dance bands), which consisted of Mexican/Latino genres like the bolero, danzón, mambo, as well as the homegrown  polca-ranchera, a genre that combined the European polka with Spanish-language lyrics.  Under the influence of the Chicano Movement, a political upheaval that rippled through Mexican American communities in the 1960s and ‘70s, Little Joe changed his band’s name from “The Latinaires” to “Little Joe y la Familia,” in 1970.

The leading band in a culturally powerful Chicano musical style known as “La Onda Chicana,” La Familia became an emblem of a Chicano musical sensibility, especially with his introduction of a thoroughly bimusical polca-ranchera  style that synthesized a Mexican, ranchero sound with a distinctly jazz-oriented one.  This pathbreaking development was first achieved in a landmark LP, “Para la Gente,” released on his own label (Buena Suerte Records) in 1972. With this stroke of genius Little Joe y la Familia arguably became the most influential musical group in the history of Mexican America.

Now recognized as the foremost icon of “la onda chicana,” Little Joe remained an active musician/singer well into the 2010s.