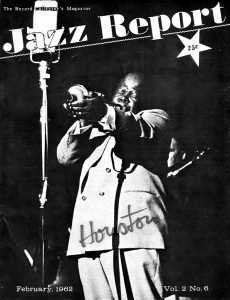 In 1962 Chris Strachwitz was writing a blues column for Jazz Report magazine. Here is part one of three articles about his travels in the south, this one about Houston.

Our blues editor, braving thirst, floods and other hardships on a research and recording expedition into the heart of the deep blues country, discovers that most of the natives are friendly. First of a series.

Key to the Highway By Chris Strachwitz

AS YOU DRIVE DOWN from the Rockies into the Texas Panhandle, the humid weather hits you rather sud­denly and the green fields strike you in contrast to the atomic wasteland of the desert states. It begins to rain, then the sun comes out again and it gets hotter. But you know you’re in the land of the blues as you drive through Fort Worth, Waxahatchie, Corsicana, Buffalo, Centerville, Huntsville. It’s mostly farm land — watermelons everywhere, some corn.

In the piney woods around Huntsville and on down into Houston, a thunderstorm invariably greets you at this time of summer. The streets are flooded and rain is pouring down. But after all, this is the “water coast” and you look forward to hearing some tough, down-home music.

The man who has the most fantastic gift for making up songs about anything that captures his attention is Lightning Hopkins, in my opinion the greatest of the modern day blues men. Lightning is a man detached from the average rut most of us are in. He works when he feels like it. When some joint needs music, he is the entertainer who gives the people what they want. He gives them his feelings, and he shares with them a mood. He pleases his audience with his songs and his rhythm.

Perhaps the latter is more important to most of his Houston audiences, who are usually not willing to listen attentively to his lyrics. The condition of the amplifying equipment often makes this impossible any ­how.

During the rainy summer months work is slow in Hou­ston. Nevertheless, there is music someplace, and almost any night and until last summer Lightning had his regular rounds: Maybe Pop’s Place on Friday night, Irene’s on Saturday, the Sputnik Bar on Sunday, maybe French Town on Monday, rest on Tuesday, some joint downtown on Wednesday. But if it rained too hard or if his shoulder ached or perhaps if the windshield wiper on his car was out of order, Lightning simply wouldn’t go to the job. There was always another day, another place. The customers would turn on the juke­box, Lightning wouldn’t earn his $30, but there were no bad feelings.

This freedom was no longer his when he started to go on tour. In our sophisticated night club life of the cities it would be impossible. The audience would be furious, the owner up in arms. The man would be fired and sued. But Lightning has left Houston. He has gone to New York, to California, and will probably soon go to Europe. He prefers these “new” audiences because the people listen to his songs. They listen to everything he does. He is no longer just a dance musician; he is once again the minstrel he was in former days when he sang on the street corner or while riding the bus up and down the line.

The joints in Houston needed music. Lightning was gone, so they hired someone else: Hop Wilson, TV Slim, Clifton Chenier, or any one of the many zydeco groups which have sprung up in Houston in large numbers dur­ing the past few years. Competition is stiff. The zy­deco bands in particular are cheap and very popular with the dancers. What is zydeco? This music is usual­ly played on the accordion with drums or washboard accompaniment. It’s based on the music of the Acadians and probably started with the Negroes who grew up on the plantations of the French or Cajun speaking white people in Louisiana. They mixed it with the blues and rock-and-roll, and this mixture is known as zydeco around Houston.

Johnson’s Cafe is the most popular zydeco club in town. A group is there almost any night. The dancing is fantastic, with many soloists showing off their talents. It’s wild and uninhibited, but it’s beautiful, modern ballet — and the music drones on and on. The Watusi was the dance rage last summer and I guess now it’s the Twist. But it’s all more or less the same thing. How old is this line: “Mama, Mama, just look at Sis, standin’ in the corner doin’ the Twist”?

Lightning used to get gigs simply by making a phone call or two, but things were pretty tough last summer. The zydeco bands were moving in everywhere and Light­ning was a bit dissatisfied about the lack of jobs. On occasion he went with Clifton Chenier, the most famous of the zydeco musicians, up to Dallas and Fort Worth. But his concert tour was in the planning stage and now and then only would he land a gig.

Like the weather, Lightning is a man of many moods. Some nights, in a small joint like the Sputnik, he would sing the blues, nothing but the blues. L.C. Wil­liams was with him the night we caught him (see cuts) and L.C. was doing most of the singing. It was the last time I ever saw L.C. He died later of TB.

There was no dancing in that small club and the peo­ple listened. Like the concert audiences, they lis­tened to his songs. Everybody had the blues that night. On other nights, however, when Lightning was feeling good, he jumped every number, one boogie after anoth­er. The people danced and no one would have listened to his songs anyway. He knows his audiences and gives them what they want.

Much of Houston — the people in the air conditioned offices, the average middle-class worker — is hardly aware of the world in which Lightning and his music live. Houston grew quickly. It mushroomed without much planning. Bayous form the natural boundaries between many of the ghettos which are known as wards. These are sections of the city, divisions you find in all major urban centers of the U.S.A. It’s a rough city. Murders occur daily but they are not in the headlines.

It’s too common. Social and racial lines are drawn pretty rigidly, and perhaps the urge to survive so­cially and physically has caused this lack of com­munication among the wards. But that’s Houston.