Everything But the Squeak 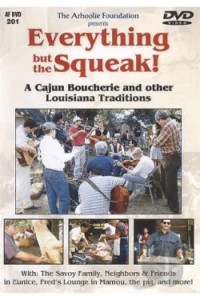 Everything But The Squeak

This DVD is now out of print but you can watch the entire video below.

The Arhoolie Foundation produced the video documentary entitled “Everything But The Squeak” in conjunction with Documentary Arts Inc. of Dallas, TX. The film documents a Cajun Country “boucherie” (butchering of a hog and eating it!) and other Cajun/Creole traditions in the Eunice, La. area. The DVD features a jam session at the Savoy Music Store, music by Aldus Roger, Ken Smith, Donald Thibodeaux & Cajun Fever at Fred’s Lounge in Mamou with Tante Sue, the Huval brothers, and more. Arhoolie Foundation (AF DVD 201)
In these hurried days, with shopping centers everywhere, even Cajuns in southwest Louisiana will stop at a fast food chain to grab a quick fat-filled burger or hot dog, instead of going home to prepare a nourishing traditional meal. Most have forgotten how families used to get together for a ‘boucherie’ in the days before everything could be found in the refrigerator. A few families, however, are trying to continue the old traditions. This video documents one such lively event where friends and neighbors gather and bring side dishes and desserts to compliment all the meat dishes obtained from the newly butchered hog and celebrate the feast with music and dancing.

The film also shows how traditional Cajun music is passed on from one generation to the next, not only via ‘live’ radio broadcasts from beer joints like Fred’s Lounge in Mamou, LA, but also at jam sessions where old timers share their skills with the younger musicians.