In 1962 Chris Strachwitz was writing a blues column for Jazz Report magazine. Here is part three of three articles about his travels in the south, this one about Louisiana. 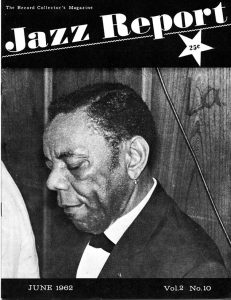 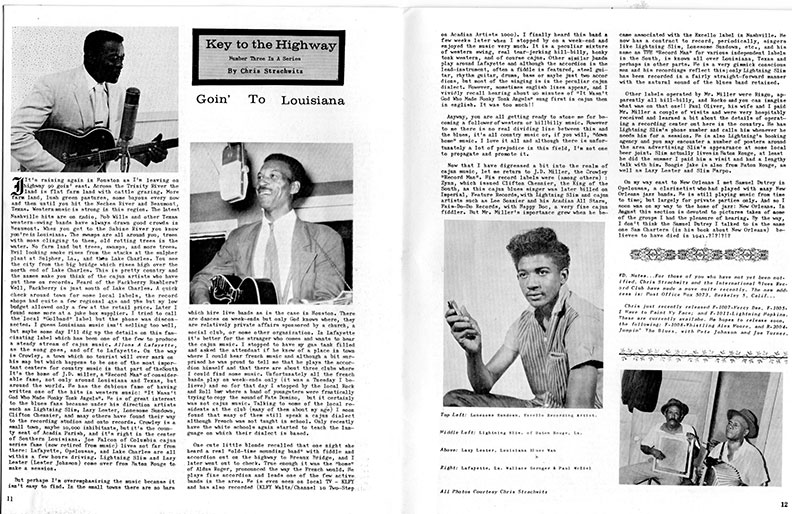 Key to the Highway

It’s raining again in Houston as I’m leaving on highway 90 goin’ east. Across the Trinity River the land is flat farm land with cattle grazing. More farm land, lush green pastures, some bayous every now and then until you hit the Neches River and Beaumont, Texas. Western music is strong in this region. The latest Nashville hits are on radio, Bob Wills and other Texas western-swing bands have always drawn good crowds in Beaumont. When you get to the Sabine River you know you’re in Louisiana. The swamps are all around you, trees with moss clinging to them, old rotting trees in the water. No farm land but trees, swamps, and more trees. Evil looking smoke rises from the stacks at the sulphur plant at Sulphur, La., and then Lake Charles. You see the city from the big bridge which rises high over the north end of Lake Charles. This is pretty country and the names make you think of the cajun artists who have put them on records. Heard of the Hackberry Ramblers? Well, Hackberry is just south of Lake Charles. A quick check around town for some local labels, the record shops had quite a few regional 45s and 78s but my low budget allowed only a few at the retail price. Later I found some more at a juke box supplier. I tried to call the local “Goldband” label but the phone was disconnected. I guess Louisiana music isn’t selling too well, but maybe some day I’ll dig up the details on this fas­cinating label which has been one of the few to produce a steady stream of cajun music. Allons A Lafayette, as the song goes, and off to Lafayette. On the way is Crowley, a town which no tourist will ever mark on his map but which happens to be one of the most important centers for country music in that part of the South It’s the home of J.D. miller, a”Record Man” of considerable fame, not only around Louisiana and Texas, but around the world. He has the dubious fame of having written one of the hits in western music: “It Wasn’t God Who Made Honky Tonk Angels”. He is of great interest to the blues fans because under his direction artists such as Lightning Slim, Lazy Lester, Lonesome Sundown, Clifton Chennier, and many others have found their way to the recording studios and onto records. Crowley is a small town, maybe 10,000 inhabitants, but it’s the county seat of Acadia Parish, and it’s right in the center of Southern Louisiana. Joe Falcon of Columbia cajun series fame (now retired from music) lives not far from there: Lafayette, Opelousas, and Lake Charles are all within a few hours driving. Lightning Slim and Lazy Lester (Lester Johnson) come over from Baton Rouge to make a session.

But perhaps I’m overemphasizing the music because it isn’t easy to find. In the small towns there are no bars which hire live bands as is the case in Houston. There are dances on weekends but only God knows where, they are relatively private affairs sponsored by a church, a social club, or some other organization. In Lafayette it’s better for the stranger who comes and wants to hear the cajun music. I stopped to have my gas tank filled and asked the attendant if he knew of a place in town where I could hear french music and although a bit surprised he was proud to tell me that he plays the accordion himself and that there are about three clubs where I could find some music. Unfortunately all the french bands play on week-ends only (it was a Tuesday I believe) and so for that day I stopped by the local Rock and Roll bar where a band of youngsters were frantically trying to copy the sound of Fats Domino, but it certainly was not cajun music. Talking to some of the local residents at the club (many of them about my age) I soon found that many of them still speak a cajun dialect although French was not taught in school. Only recently have the white schools again started to teach the language on which their dialect is based.

One cute little blonde recalled that one night she heard a real “old-time sounding band” with fiddle and accordion out on the highway to Breaux Bridge, and I later went out to check. True enough it was the “home” of Aldus Roger, pronounced the way the French would. He plays fine accordion and leads one of the few active. bands in the area. He is even seen on local TV – KLFY and has also recorded (KLFY Waltz/Channel 10 Two-Step •:on Acadian Artists 1000). I finally heard this band a few weeks later when I stopped by on a week-end and enjoyed the music very much. It is a peculiar mixture of western swing, real tear-jerking hill-billy, honky tonk western, and of course cajun. Other similar bands play around Lafayette and although the accordion is the lead-instrument, often a fiddle is featured, steel guitar, rhythm guitar, drums, bass or maybe just two accordions, but most of the singing is in the peculiar cajun dialect. However, sometimes english lines appear, and I vividly recall hearing about 20 minutes of ‘,It Wasn’t God Who Made Honky Tonic Angels” sung first in cajun then in english. It was too much!!

Anyway, you are all getting ready to stone me for becoming a follower of western or hillbilly music. However to me there is no real dividing line between this and the blues, it’s all country music or, if you will, “down home,’ music. I love it all and although there is unfortunately a lot of prejudice in this field, I’m not one to propagate and promote it.

Now that I have digressed a bit into the realm of cajun music, let me return to J.D. Miller, the Crowley ‘,Record Man”. His record labels were (among others) : Zynn, which issued Clifton Chennier, the King of the South, as this cajun blues singer was later billed on Imperial, Feature Records, with Lightning Slim and cajun artists such as Lee Sonnier and his Acadian All Stars, Fais-Do-Do Records, with Happy Doc, a very fine cajun fiddler. But Mr. Miller’s importance grew when he became associated with the Excello label in Nashville. He now has a contract to record, periodically, singers like Lightning Slim, Lonesome Sundown, etc., and his name as THE “Record Man” for various independent label in the South, is known all over Louisiana, Texas as perhaps in other parts. He is a very gimmick conscious man and his recordings reflect this; only Lightning Slim has been recorded in a fairly straight-forward manner with the natural sound of the blues band retained.

Other labels operated by Mr. Miller were Ringo, apparently all hill-billy, and Rocko and you can imagine what was on that one!! Paul Oliver, his wife and I paid Mr. Miller a couple of visits and were very hospitably received and learned a bit about the details of operating a recording center out here in the country. He has Lightning Slim’s phone number and calls him whenever he needs him for a session. He is also Lightning’s bookie agency and you may encounter a number of posters around the area advertising Slim’s appearance at some local beer joint. Slim actually lives in Baton Rouge, at least he did the summer I paid him a visit and had a length talk with him. Boogie Jake is also from Baton Rouge, a well as Lazy Lester and Slim Harpo.

On my way east to New Orleans I met Samuel Dutrey is Opelousas, a clarinetist who had played with many New Orleans jazz bands. He is still playing music from time to time:; but largely for private parties only. And so I soon was on my way to the home of jazz: New Orleans. In: August this section is devoted to pictures taken of some of the groups I had the pleasure of hearing. By the way I don’t think the Samuel Dutrey I talked to is the same one Sam Charters (in his book about New Orleans) believes to have died in 1941. ?!?!?!? (editor’s note: see comment below)

Part one: Lightning and the Zydeco Uprising