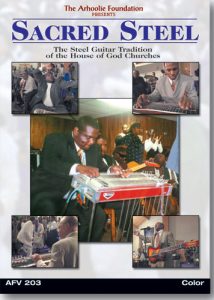 Directed by Robert L. Stone The Arhoolie Foundation, in cooperation with the Documentary Arts Foundation, produced this documentary film under the direction of Robert Stone. Sacred Steel shows the development and use of the steel guitar in assisting the services and leading the “praise music” in the House Of God denomination of these Holiness-Pentecostal churches. Featuring the Campbell Brothers with Katie Jackson, Elder Maurice “Ted” Beard, Calvin Cooke, Willie Eason, Elder Aubrey Ghent, Rev. Glenn Lee, the Lee Boys, Robert Randolph, historic footage of Henry Nelson, and much more.

From the DVD box:

In the late 1930’s musicians of the House of God Keith Dominion Holiness-Pentecostal Church began playing their worship music on electric steel guitars. Taking the words from Psalm 150:4 “praise Him with stringed instruments” and Psalm 149:3 “let them praise His name in the dance,” the guitarists developed unique styles, tunings, repertoires, and techniques.

Filmed on location in several churches, “Sacred Steel” traces the development of this tradition. Through interviews, performances, and historic footage, “Sacred Steel” will move the body and spirit as well as educate.

Directed by Robert L. Stone; Produced by Chris Strachwitz of the Arhoolie Foundation and Alan Govenar of Documentary Arts Inc.; Camera by Robert Tullier; Editor: Andrew Dean; Sound recorded by Strachwitz, Govenar, and Glen Drinkwater. Running time: 55 minutes. Arhoolie Foundation AF DVD 203. Quotes about Sacred Steel: “Sacred Steel was the most exciting roots music to emerge at the end of the 20th century, and this video is the next best thing to actually being in the church with the musicians.” -Geoffrey Himes, music journalist for The Washington Post, Rolling Stone, Chicago Tribune, and others “…unless you visited a House of God church, it was hard to imagine the gripping power this phenomena yields. Until now, that is.” -Dan Willging, Dirty Linen