For a limited time watch the entire documentary for free. 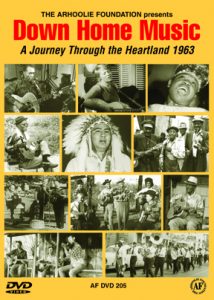 Down Home Music A Journey Through the Heartland 1963

filmed by Dietrich Wawzyn In 1963 German filmmaker Dietrich Wawzyn set out to shoot a series of films for German television that took him through the southern US in search of American jazz and roots music. He contacted Arhoolie Records founder Chris Strachwitz, who jumped at the chance to join him and share his enthusiasm for regional musical traditions. Wawzyn made three films dealing with blues, gospel, and hillbilly music. The negatives to those films were lost. This film re-creates the journey from the best elements still available and includes much previously unreleased footage. There is an optional audio track featuring off-the-cuff commentary by Chris Strachwitz. Edited by Maureen Gosling. Black and White. 75 minutes. NTSC, all regions.

A few scenes from the DVD:

“…Just typing the names makes me salivate. Watching the film, nugget after nugget, sets the pulse racing! Some segments are just fragments of a performance but it’s still enough to ignite a frisson of delight. The DVD comes with alternative commentaries. The first has comments from Dietrich Wawzyn with some of his views on the trip, the second has an off-the-cuff, informative (often amusing) running commentary by Chris Strachwitz. For me this is, without doubt, the finest music DVD of the last year. 75 minutes of pure gold!” – Dave Peabody, FRoots Magazine