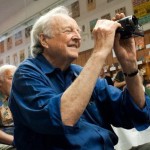 We are calling these “home videos” since they were never intended to be released  (although the audio was used on a few Arhoolie albums). As soon as small, portable video recorders were available, Chris Strachwitz carried one on his travels. First Video 8, then Hi-8, then early digital, and now HD digital. Shot at a restaurant, from the audience, in the field, at a party, or in a living room, the circumstances for capturing the image and the sound were not always optimal, but he captured an amazing array of musicians.