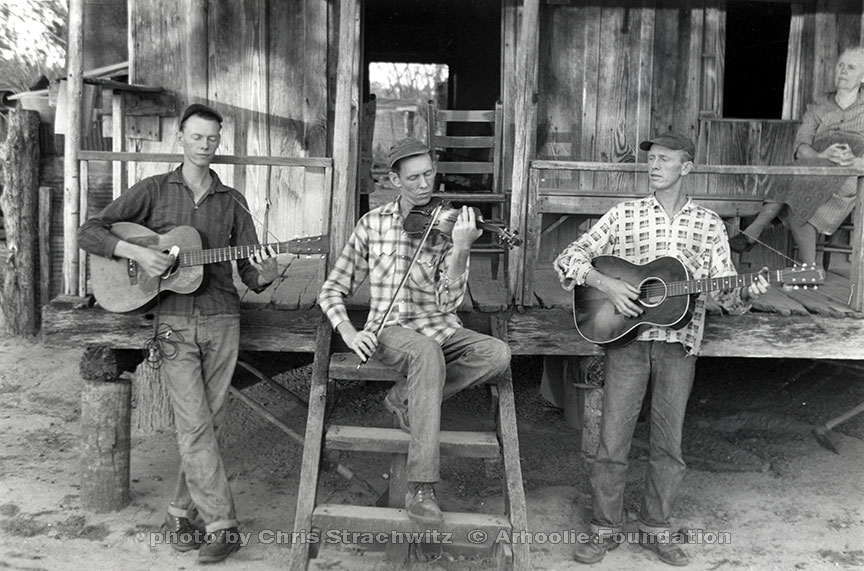 Intrigued by a 78rpm recording on the Trumpet label,  Chris Strachwitz, in 1960, took his first journey into the country music world of southern Mississippi when he visited the Hodges Brothers. 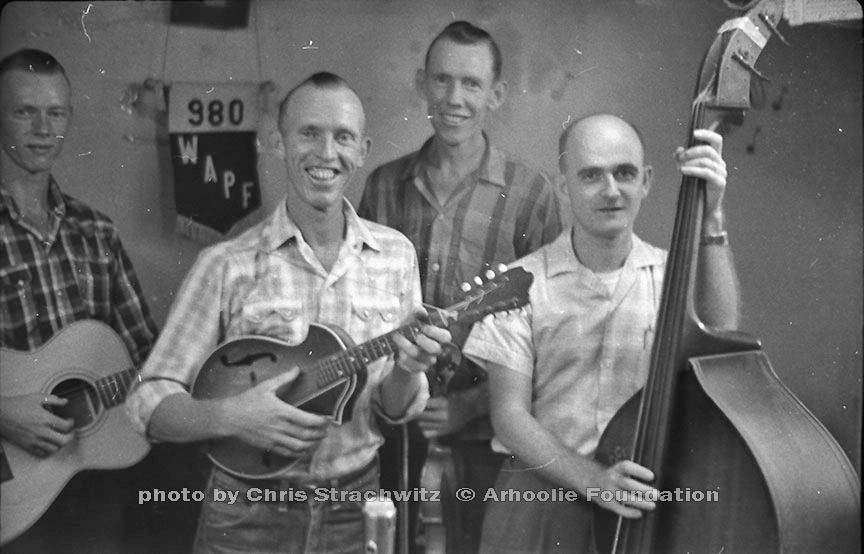 Chris talks about meeting the Hodges Brothers in 1960

In 1960, when I was heading down South, and eventually going to meet Paul Oliver and his wife in Memphis. Of course, I drove first to Houston, is what was usually my first stop. Then I went to New Orleans, I believe, and I apparently had found their Trumpet Records sometime before then, because I apparently had contacted Mrs. McMurry of Trumpet Records in Jackson, Mississippi, to find out where they live, because I really liked their singing. And, I guess, the side that I was impressed by was ‘It Won’t Be Long’. It’s a pure duet singing of the two of them; nothing more than that. No other accompaniment. I forgot what was on the other side. Anyway, I liked those numbers, because I was always crazy about hillbilly music; that’s right from the time in 1947, when I first came to this country and went to the Cate School and heard this amazing amount of hillbilly music on XERB in Rosarito Beach, Baja, California. And of course later on, then I quickly became a total New Orleans jazz fan. And then by the early ’50s, also a real blues fanatic.

But anyway, I had corresponded with Paul Oliver, either in late ’59 already, after I had come back from my very first pilgrimage to Houston, where I met Lightning Hopkins, and was absolutely knocked out by how incredible he was improvising stuff at this little beer joint. And I was very keen about the Hodges Brothers. I liked their sound. I had that record. Mrs McMurry had told me where they lived. They lived in Bogue Chitto, Mississippi, very close to McComb which is south of Jackson. Actually, not that far from the Louisiana border. I apparently found my way to their house. It was kind of mind blowing. I’ve never been in a rural area quite like that, because I was approaching their place, for example, it was off the main highway. And somehow, I must have had a map or asked people how to find this rural address in Bogue Chitto.

As I approached it, I saw this mule walking in a circle, and pulling this long piece of wood, kind of like a tree trunk; a skinny tree trunk. And he was apparently grinding this cane. I had never encountered that before. It was certainly a totally amazing sight, shall I put it that way. As I got to their house, I saw that they lived literally, in one of those one room country shacks, which was high off the ground, so in case it flooded there, the water wouldn’t get there. I don’t even think they had any electricity. So we went to the radio station where they were doing regular programs every morning. That was also, the only picture I took there that I had for the original album, which I put out. And one of my favorite cousins, Sharon Farr, had drawn the cover for that LP number 5001; the original production of it. So it was a very, very funky looking record that I put out.

But I was really impressed by them. And I liked them so much. So I went with them to the station. It may have been the next day, I’m not sure, but those things that fade away from your mind, because I’m sure I didn’t get there that early in the morning. And I did set up my tape recorder at the radio station where I just used my one microphone. I had it sticking up in the air, and had the three of them stand around in a circle instead of hanging it up from the ceiling because there apparently wasn’t any place to hook it to. So I stuck it on a mic stand and pointed it up so that it would pick up the sound all around them a little bit.

And that’s how I made the first recordings by them. I really was impressed by Felix, the fiddler, because he was awfully good. And of course, the two of them, I guess, Felix and Ralph, were saying ‘yes’ to do the duet. And Ralph played the mandolin, James Hodges was simply the rhythm guitarist. I thought they sounded… At that time, the sounds of the… I forgot what other brother duets I’d heard. Oh, I know, the Armstrong Twins I’d heard on XERB. They were on 4 Star Records. Floyd and Lloyd, the Armstrong Twins. Anyway, this was about the closest thing I could possibly run into. I was just delighted with the way they sounded. But unfortunately, they were being managed, so to speak, by the bass player, who was also a DJ at that radio station. The station (WAPF) was actually in McComb, Mississippi, because Bogue Chitto was this little nothing place. Actually way out in the country!

And so he insisted on singing most of the songs, much to my chagrin, so to speak. But you couldn’t turn down your host, so he let me into the station to use that facility, because they had no electricity at their house. But I was impressed, not only by the house that they lived in, where the mother, I remember, was getting water out of a well that was apparently inside the house. And she would wind it up on a rope. Next time I visited them, I think, was with the Wawzyns in 1963 and that’s when I took some pictures there. We actually filmed them also. They’re on that video that the Arhoolie Foundation put out, ‘Down Home Music – A journey Through The Heartland 1963; I believe is the name of it. And the Wawzyns] were totally knocked out when they saw how these poor Americans lived!  We noticed, in a way, that there was no chicken coop for the chickens. The chickens, at night, would climb into the tree. They would all flutter up into the tree that was there. And that was their home for the nights.

I had never seen anything quite that primitive in my entire life before. I’m sure many people here in this country weren’t as spoiled as I was, because of my upbringing. This was a whole new world that I had no idea existed. And of course later, also, I found out that blues singers were very often living in very similar circumstances, as well as other very poor people and musicians. And so I think I asked them actually, since the first recordings – if they could make me some more tapes of their music. That’s right. They actually sent me some tapes afterwards that they made and we added some more, and by the time (I don’t think I changed the original LP at all), I wanted to put out a CD of theirs, which I’m amazed I actually did, because I knew the LP never sold hardly at all. They actually had sent me a tape for that. Some more songs that they recorded, and that must have been the time they did ‘The Leaves Is Falling On The Ground”. I think that’s probably from the…1969 tapes they had sent me.

Well, it was just an amazing little group, and I wish I had recorded Felix more, because he knew a lot of interesting fiddle tunes looking back now. Of course at that time, I remember, I think I talked to them. You may have some of that talking, because he was really into bluegrass music. That was his main influence at the time. But they were a very popular local band and had an interesting varied repertoire and were quite happy and proud of having gained local popularity.

That classic picture that you took, where their mother is sitting on the porch, and they’re down in front of the house. And you can see straight through the house; the front door. You can see it straight through, out the back door. It is the most basic of a house. And sitting up on logs to keep it off the ground.

I wish Paul Oliver would have seen that, because Paul was really, besides being this amazing blues expert, he was also a real expert in vernacular architecture, which means some other thing. It’s people live in whatever material they could find to build their homes.

The Hodges Brothers, and the Armstrong Twins, and the Allen Brothers, which, who I believe, you reissued on ‘Old Timey’.

They all have a very hard style to them. They’re not smooth and soft like the Blue Sky Boys. They’re really kind of very raw. You tend to like those raw vocals, and the raw style of fiddling, playing. Why is that?

I don’t know. It just grabs me. It seems to be so powerful. And it’s sometimes similar to the Mexican duets, I think. But I’m not sure if I was really aware of those, at that time, as much as I’ve become aware of them now. Also, the Maddox Brothers and Rose had that fierceness to them. They also came from extreme poverty, and were lucky enough to make it somewhat in California. I always liked the Dixon Brothers once I heard that ‘The School House Fire’, if you ever listened to that one. That is just so fierce, it’s unbelievable; the duet singing. And of course, the Stanley Brothers could be too, at times.

The Dixon brothers, again, another very raw and hard sounding duo. And just in the people who you’ve recorded and reissued, at times. I’ve always noticed that you just like that kind of ‘down-home’ rawness. If it gets too sophisticated, it loses you.

Yeah. And of course, you can also equate it with the wonderful artists that John Cohen recorded. Roscoe Holcomb, especially when he plays that guitar on anything he sang, it was so ferocious. It’s unbelievable. Although they call him a traditional artist. I’m not sure if he’s all that traditional, because by traditional, you mean they don’t really try to change traditional music that much. But these people really did. And they incorporated the blues more than anything. And of course, their styles vary so much from place to place, and from economic situation to another; from one to the other. It’s like when Bob Wills started, when these guys were young. When Leon McAuliffe was a young steel guitar player, he was just wild. I thought he was the greatest thing ever invented, but his later recordings are really almost like Lawrence Welk type of guitar music. Oh, yes.