Stanley Willis is a bit of a mystery. He recorded very little and what he did record is not available online to stream or on Youtube. Below is a segement from Adam Machado’s notes to the CD release Hear Me Howling! which contains one track by Stanley Willis, To Be a Thief

Throughout the 1940s, ’50s, and into the ’60s, San Francisco’s Fillmore district was home to a vibrant jazz scene. Jack’s Tavern, the Texas Playhouse, the Blue Mirror, the Both/And, and Bop City were just a few of the two dozen clubs clustered together in that dynamic neighborhood. An abundance of local talent worked those clubs, and among them sometimes walked giants: Duke Ellington, Miles Davis, Billie Holiday, John Coltrane, Bud Powell, Dexter Gordon, and Thelonious Monk all came through at one time or another. After hours on any given night, you might have noticed somewhere in that crowd a strange cat wearing two suits and three hats. If you had walked up behind him at the piano, you would have noticed the handkerchief or the coat thrown over his hands to hide the chord changes and arpeggios that he guarded with paranoia. If you had been introduced to him after his set, he might have bowed graciously-as he did one night to a fifteen-year-old John Handy -and formally introduced himself by three different names, removing a different hat with each one. “He was mysterioso,” local drummer Earl Watkins remembered with a chuckle. “Eccentric” and “genius” are two other words people have used to describe him. Mysterioso: now that would have been a fitting nickname for a pianist who some said had flares of Monk, and who in 1975 vanished so completely from the scene that it was almost as though he had never been there at all. He was mysterioso, all right, but people called him the Wild Man.

Stanley Willis was born in Birmingham, Alabama, on November 15, 1922. His mother played piano, and Stanley remembered musicians coming to the house to rehearse when he was just a small child. He recalled being passed around “like a loaf of bread” by a group of old women and placed in front of the church piano at the age of four. At the height of the Depression, when he was just ten years old, his mother died. His father, an alcoholic, often left him to care for himself. He scoured garbage cans for food. His first gigs were in Birmingham brothels before he even understood exactly what went on upstairs. In his teenage years, he knew Herman Blount, known later as Sun Ra, and often went to hear him play for the high school band. Some time after leaving Birmingham, Stanley was honorably discharged from the army for what were probably mental health reasons. He went to Chicago for a while, and then Seattle, before moving down the coast to San Francisco. It’s not clear when exactly Stanley first arrived in the Bay Area, but he was certainly here by 1947 when he took a job in John Ingram’s Rhythm Czars. Ingram, a bassist and bandleader, remembers: “Any bandleader would have been proud to have him, because he was a good piano player, and he knew what he was doing at all times. But he did some weird things, let’s put it that way.” Covering his hands, wearing three suits and two hats -these might qualify as “weird things,” but they didn’t often prevent him from being able to perform. By the mid-fifties, Stanley could be found just about any night of the week at the Fillmore’s best known after-hours club, Bop City. In addition to establishing himself as a fiercely talented, if troubled, musician on the scene, Stanley helped jumpstart more than one exemplary career. In the late fifties, he brought a teenaged saxophonist into a jam session one night at a hotel in San Francisco. “And I never stopped playing with the best musicians,” remembers John Handy. “So it was Stanley who endorsed me at my first mature adult session.” Handy would go on to become one of the great instrumentalists of his time, recording notably with Charles Mingus and in many groups of his own….

from the notes to the CD/Book release Hear Me Howling! on Arhoolie Records (CD 518 A-D) 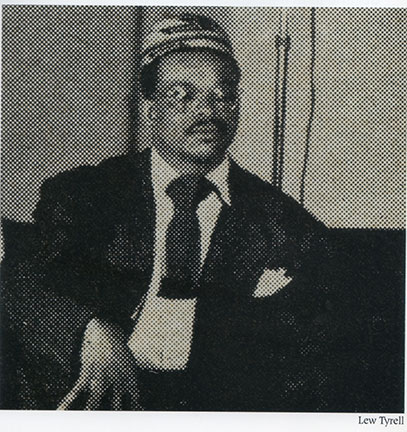