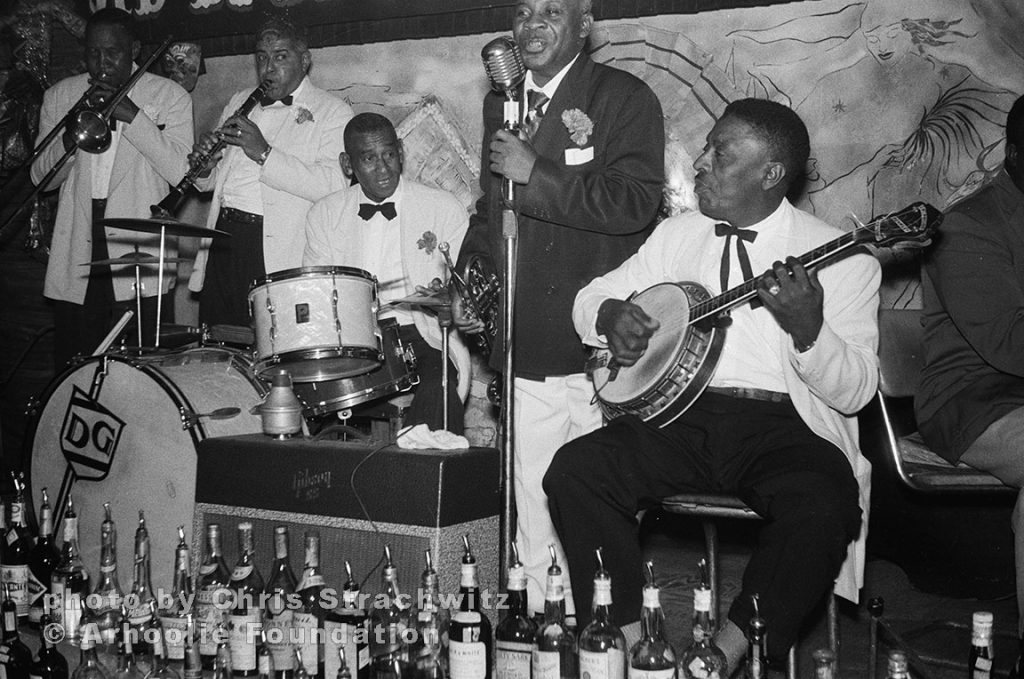 In 1956 Chris Strachwitz was discharged from the US Army at Camp Chaffee, Arkansas. Armed with a camera and the love of New Orleans jazz he took a bus to New Orleans for his first visit to his “city of dreams”.

Here is an interview with Mr. Strachwitz talking about that trip and the photos he took. 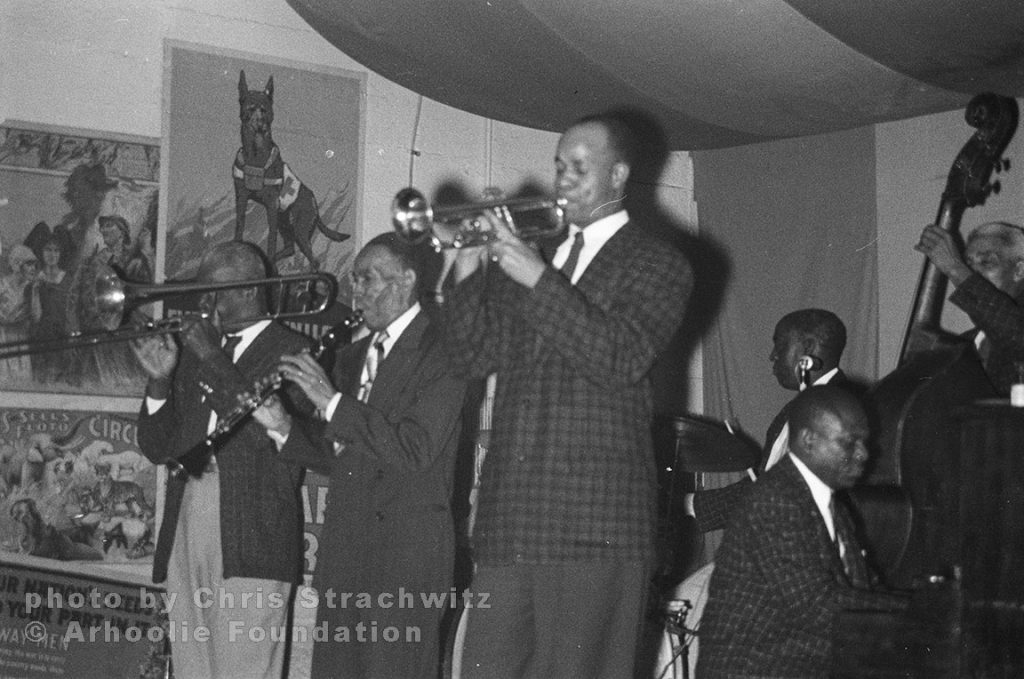 Chris talks about his first trip to New Orleans

See below photo gallery for a transcript of the interview

Okay, now that takes me back to 1956. When I got discharged from the US army, they had sent me to Austria and then Germany for two years, you know I was drafted. I was so lucky to be in between, the Korean War had just finished and the Vietnam disaster hadn’t happened yet. And so they discharged me at Camp Chaffee, Arkansas, and I of course looked on the map and, oh my God, my city of dreams is not that far down. So I took a bus to New Orleans and spent, I don’t know, must have spent a few days in this hotel. And that was before the age of air conditioning, but they had these big fans in the rooms that would twirl above your head and kept you kind of cool, but it was just amazing. This was in the summer, I think, of that year. Anyway, it was pretty warm. Maybe the bars had air conditioning, I think some of the… no, I really don’t remember.

But anyway, George Lewis, I had of course seen his band in the Bay area, at the Hangover Club in San Francisco before I went into the army. And he was already a big name, he was really popular. He was getting very popular. First of all, mainly was jazz fanatics, but when I went back, for example, to Berkeley, after I came out of the army in ’56 and went to study at Berkeley, that’s where I met Sam Charters. But also, the Lewis Band was again booked at the Hangover Club in San Francisco, that was on Bush street. And I signed up on the Cal Campus for the big game committee. I mean, I couldn’t stand football, I had absolutely no interest in football, but I heard that if you joined the big game committee, you can have a voice in what kind of a band you should bring to Wheeler Auditorium to play for the campus during that week.

And I said, oh my God, I got to bring the George Lewis Band out there. And so I joined this big game committee. I mean, I was a fanatic already, I guess. And I persuaded the young students that were with me, listen, I told them, the best band you’ll ever hear is the George Lewis Ragtime Band from New Orleans. They’re all black guys and they play the most soulful music. I’m sure it must have really persuaded him so I took a few of them, I think, went with me. I think you had to be 21 or older to get into the place, or they made an exception, I forget when, I guess we were probably over 21 by then.

And they all thought this was the best thing they’d ever heard. They had no idea of this kind of music existing because it had that solid rhythm, that 4/4 beat. But I thought, this is the most soulful black band I’ve ever heard in my life, and not that I’d heard that many others, but playing this really funky type of traditional type of music, I’m not sure if I even know what the hell they were doing. But anyway, I was totally enamored by the event. They all agreed and we brought them to the Berkeley campus and Phil Elwood MC’d it, I’ll never forget that they filled Wheeler Auditorium. It was just wonderful.

But anyway, so I went back to New Orleans in ’56 when I got out of the army. That was the first time I went there, actually. And so of course I spent some time, I must have spent one day, one evening, with the George Lewis Band. I don’t know really who the trombonist was at the time, but I think Lars (Edegran) said, yes Chris, that’s the same man who’s in that later picture, which I took of definitely Bill Matthews Band, you see. Because George Lewis, when he came out here, one time later, did have not his regular band, which it gets complicated here because you will see him playing with a different band on the subsequent series. I think he was playing with the  number 10. Photo number 10, you see, that used to be… that’s pretty much the George Lewis Band, but it has Willie Humphrey on clarinet, because that’s got Jim Robinson and it’s got, who is the trumpet player again? Kit Howard. Yeah, Kit Howard who’s singing in that picture. You see, that was the usual George Lewis Band.

They were gigs for them in those days, and they probably took anybody who was available then, you know. And in the previous number eight, you see Jim Robinson, that was George Lewis’s usual trombone player. I was very keen about all of them, and especially the Bill Matthews Band. But of course it wasn’t Papa Celestin, used to be leading that band when they made their first records and after the second war you see. And I used to listen to those on the ABC Radio network, and this was in 1952 maybe, or ’53, when Papa Celestin was heading that band with Bill Matthews as the trombone player. And it was just a wonderful, wonderful band. And so I spent several… I guess one of the Bill Matthew Band, that was, I think, at the Paddock Lounge, because I think that’s where Papa Celestin played doing his last periods, you know.

And let’s see what else? Oh, I can say something about Billie and DeDe Pierce, yeah. I forgot how I heard them first, but I think it may have been on one of the Folk-Lyric records. I forgot. But anyway, I just loved that little duet. She would sing blues and DeDe Pierce the trumpet player, he was blind, and he sang wonderful versions of “Eh La Bas” And he sang in kind of a Creole French accent. And this was a wonderful little dance hall, somebody must’ve told me, but that’s right, somebody in New Orleans told me you should go to Luthjen’s. And maybe that’s how I first heard them, I really don’t remember. But it was mostly older Italian couples that were dancing in the place. And I have a feeling that violinist was hired by them to kind of… they did a tremendous variety of material, you know, everything from blues to old dance tunes to, I’m not sure what else.

I don’t really remember, and the people loved to dance to that music. It was basically dance music. And that was before rock and roll came in and sort of ruined it.

I’m curious about these clubs, where were they located in New Orleans? Were there lots of clubs that had jazz still at this point?

No, they were mainly on Bourbon Street. That’s where the Paddock Lounge was. That’s where Papa Celestin’s Band was playing. I don’t remember where George Lewis, his band was playing that night, but they were mostly on Bourbon Street I think I remember. I don’t think there was hardly anything else that I ventured to, I mean, I would imagine that some of these rhythm and blues clubs also existed that catered primarily to African Americans, because Bourbon Street was strictly white. I mean, this was during the segregation era, I mean blacks were of course waiters and in the kitchen, and the bands were black because people just loved the old jazz. That was just a huge attraction.

And although most of them probably got sick and tired of playing When the Saints Go Marching In, you know, or whatever, but it was decent work for them, and it was music that they were all raised with, and some of them turned a little bit towards more modern type playing, but I must say the traditional jazz fans were not too tolerant of that at the time. You know, they wanted the old timeless sound like they did in 1928.