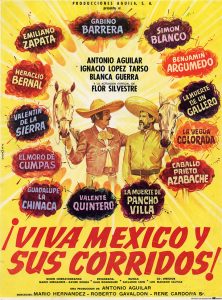 Music, especially the corrido, was an important component in many Mexican American and Mexican films. Many films were titled after or totally based on well-known corridos. These lobby cards, used for display in movie theaters, represent a few examples of films titled after corridos and musicians whose recordings can be found in the Frontera Archive of Mexican American and Mexican Recordings. All of these were collected by Chris Strachwitz and part of the Chris Strachwitz Collection.