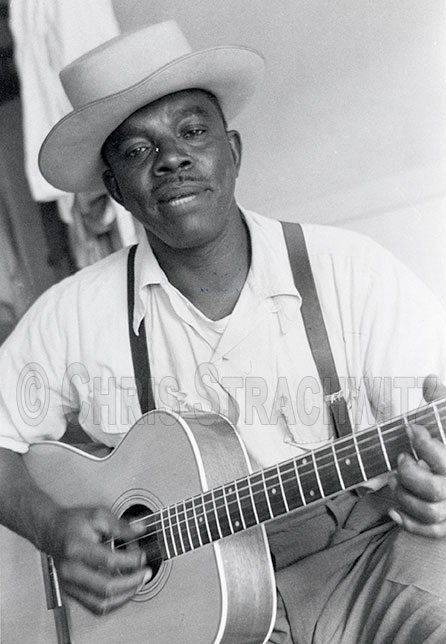 Chris Strachwitz:                   How did you make yourself heard in the old days, when they didn’t have amplifiers and all that, did you just have to play harder?

K.C. Douglas:             Yeah, you could hear that pretty good. Sometimes a fiddle, because we used to be ………, that guy could fiddle. Oooo, man! They wouldn’t allow to play on the streets. Around no band, drums, you didn’t hear no guitar, they couldn’t hear them.

K.C. Douglas:             I never did pay very too much attention to them. Most of your bands, they come around back in the old country. Didn’t have too many bands around, unless it was a medicine show or something like that, hardly ever.

Chris Strachwitz:                   It has a beautiful swing to it. Do you ever hear a fellow named Willie McTell? To me, at least on a record once I heard, he played something like that. I don’t think he ever became too famous, Blind Willie, he called himself all kinds of names, he recorded under. Do you ever find people who will ask for the old stuff in the clubs?

K.C. Douglas:             Setting straight, that’s what I told you tonight. That’s what makes that kind of music have such rhythm, it’s minus of the other notes that go with it, see?

Chris Strachwitz:                   Do you have any songs about disasters, or any stories about people that maybe your relatives told that went on? Any songs that told a story. A lot of times, like Lightning Hopkins he once sang one about the bad winter they had in Houston one year. I was wondering if you’ve ever heard songs like that .

K.C. Douglas:             Oh yeah. This guy back, I don’t know whether you would remember or whether you was old enough. This guy, when the high water was in 1927, the Mississippi River had all that, they had all kind of.

K.C. Douglas:             That’s the biggest high water they ever had in the Mississippi River. That’s the time, oh man. Washing houses and everybody, people was going down there to sit on top of houses, just going on out.

K.C. Douglas:             Yeah. It go right through Jackson, right straight on into Memphis. All the way from New Orleans on into Chicago.

K.C. Douglas:             Yeah, right on through Jackson, Mississippi, right on into Alabama. All four of them highways crosses right in Jackson.

K.C. Douglas:             That’s where that come in at. You don’t have too much trouble with the white people down there about nothing like that but the old reb timers. Them the guys, the young class people don’t see that.

K.C. Douglas:             Well, see, the thing about it. Color people was under the slave, and after they come out from under slave, in that country, he still wasn’t a free man, he went from bound slave to free slave. That’s as far as he could go because they was under-educated, they didn’t know how to do nothing, he didn’t know. He actually didn’t know. I read Uncle Tom’s Cabin and a lot of those books, those people didn’t know. When they find out that they didn’t have to be sold and bought, man come out and say, “You can work wherever you want to work.” Well, he didn’t have nothing to work with. It is still left up to the white man to set up some kind of deal for him to even make his own living, because he didn’t know.

K.C. Douglas:             Yeah, he didn’t know. They set up what they called that sharecropping and like that, because in those days, those farmers was called slave owners.

K.C. Douglas:          If it hadn’t been for the white man, he didn’t have nowhere to go. He didn’t know how to do nothing but work because that’s all he had to …….. The country’s just now beginning, in that part of the country is just beginning to get away from that. The way they’re getting away from it now is because the last war, so many people left.

K.C. Douglas:          That’s what make that. Otherwise, it would’ve been just about as bad as it was, because people didn’t know. People wasn’t traveling ‘til the war went on. What few that did, like my father, he left home when I was a baby.

K.C. Douglas:          He never did come take me, I was with his mother, my grandmother. He ended up right back there on that farm. Now, you take the young class people, he won’t go back.

K.C. Douglas:          They don’t know, he don’t know. The biggest of us here in the United States, we don’t know nothing about Russia, no more what they tell us, or what we read. We ain’t been there. See? You get a lot of people say, “Well, how come all them peoples don’t leave and go someplace?”

Well …… played the Mercury Boogie, but it was slower tempoed.

K.C. Douglas:          They used to have quite a few banjo players, they out, too. Banjos, next thing that’s going out now look like it’s trumpets.

K.C. Douglas:          But you know there ain’t too many of them fool with mandolins anymore, but I like them chords some of them guys make on them banjos. Oh my, that’s some pretty chords made there!

K.C. Douglas:          Well, actually, a good songster, if he took singing, a good song is supposed to sing anything.

K.C. Douglas:          He’s supposed to sing everything, blues or anything. You take most of them church people, they don’t want to sing it. That’s another thing that people didn’t hear it from back down there. The church, they church crazy.

K.C. Douglas:          Oh man, that’s another thing they got from way back, they just church crazy. As far as I’m concerned, I ain’t see that much good they ever done. Not to help the race of people. Might help you when you’re dead, but…

K.C. Douglas:          I think, for the colored people, that come from slavery time too. At one time, they didn’t allow them to have churches. They said, no.

K.C. Douglas:          Well, the white people, they had churches, but they didn’t allow the colored people to have them. They would slip around and hear the white people singing and praying and they start trying to do it. The book says that they had to get in a chimney corner, or go down in the woods somewhere and not let them hear them. They worked out where they let them have their churches. They said the reason they did that, they wasn’t learning anything, and the human being has got to be learned something. If it don’t he go nuts. They had a bunch of those guys, slaves, they’d have 15, 20, or 25 of them. Me and you working together, come in this evening, got mad, I’d like to cut your head off. I didn’t have any fear. Then, they decided that they would teach them fear. We got to learn them something, but we don’t want him to know no political. We don’t want him to have no education, so we go to learn them something. Some smart guy said, “Some of them trying to serve God and have church, just let him go that way.” They rigged up the churches, then the slave owners will say they went building up churches, making him pay for it back there on the back side of the place…

K.C. Douglas:          Yeah, that’s drink, you got to get drunk off of. The guy went and made that, Tommy Johnson, he made that record in 1927, ’28. He the only man I ever see whiskey wouldn’t make him drunk, it had to be canned heat or alcohol. I seen him drink a pint of corn Whiskey and didn’t stop. I seen him catch a man’s hand with one hand, they bought him a pint of whiskey, and he turned it up. When he turned it down, they throwed the bottle away.

K.C. Douglas:          He got up and went on downtown, told them he needed something to get drunk off. I said good God from heaven, I was trying to play guitar too. I said good God, what kind of insides does that man got? He wasn’t no bigger than that, but that guy could sing. He could drink straight alcohol.