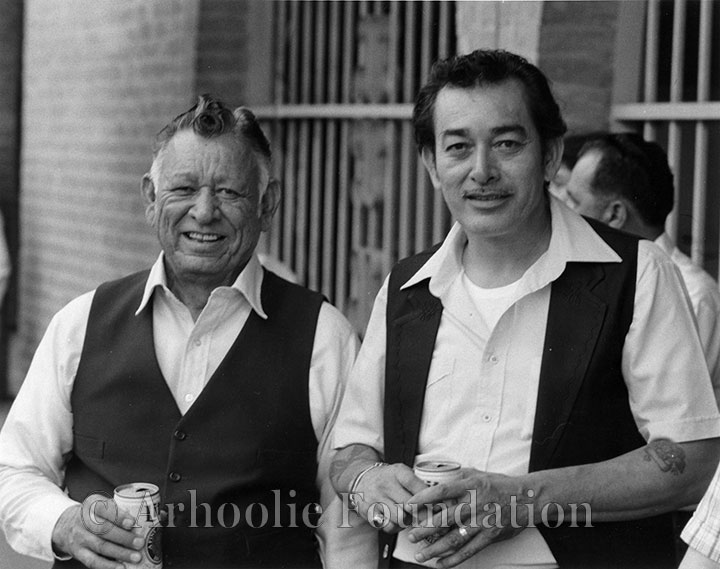 “Naturally now you can’t stick just with polka and redova and schottisches. You have to play what’s going on in the world. Starting with polka, and a little rock-and-roll, or a little cumbia, cha-cha-cha… 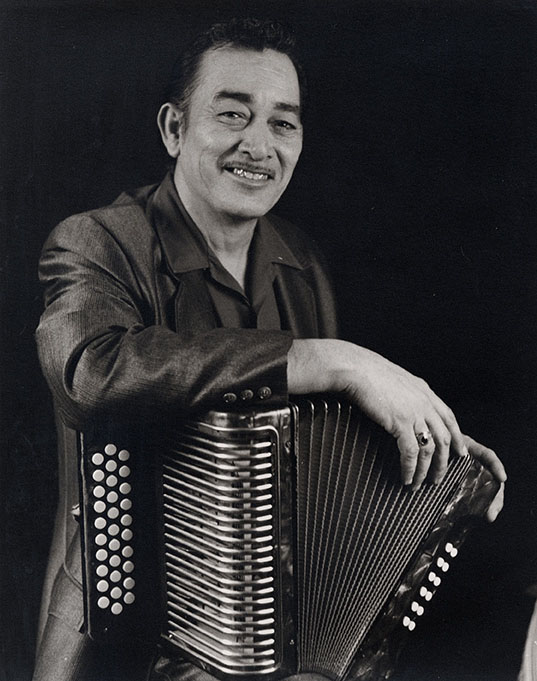 Flaco:              Originally, Flaco means slim or skinny. When I was a young kid, thirteen, fourteen years old I used to be real, real skinny, real thin. Here in a TV show, this radio announcer, he was Master of Ceremonies though, he used to play with me all the time. Flaco, and Flaco here, and Flaco there, so when I started recording when I was 16, the name Flaco now. It wasn’t Leonardo Jimenez which is my name.

Flaco:              Leonardo. I started recording under this name of Flaco Jimenez so it’s been like that ever since.

Chris:               Are any of the people still here that he recorded with? Do you know this fellow who played bajo sexto with them?

Flaco:              Here in San Antonio, yes. He was the first one that came out in record, though. The accordion it has been in existence for a long time.

Chris:               Who were some of the other accordion players that you liked when you started out? Besides your father.

Flaco:              No. I just practiced and hang around with guys that knew how to play the guitar. Actually, I came to have a group when I was about sixteen years old. I got my own group.

Chris:               How’d you pick the songs that you wanted to play? Did you write any yourself or did you pick up the ones that the jukeboxes liked?

Flaco:              I used to just pick them up. Wherever I heard them, I just picked them up. Of course, now that I’m recording, it’s kind of hard to get the material. You can’t record the same material that everybody’s recording.

Chris:               Have you met any older men around, that may have some interesting old songs that you might like to hear? Have you ever looked for any of these guys?

Flaco:              Yes. I’m always looking for some new songs, yes, and old songs that haven’t been heard for a long time. There’s a lot of old people, that they know those kinds of songs. We have to just look for them.

Chris:               Yeah. I think it’d be really interesting. Maybe we could get together on that because that’s what really I’m sort of intrigued by, because I just was over at Norteño. Did you learn any songs from your father, like he made several corridos……

Flaco:              Yes. I’ve recorded quite a few songs which he made. Now, I’ve got a release, a new, I think it’s a pretty good release of a song he made. It’s Buscando a Mi Madre. It’s a song that’s pushing pretty good right now. It’s his. It’s not an old song. He just made it a few months ago so he gave me the privilege to record it.

Chris:               Did he ever tell you where he got most of those tunes from? A lot of those polkas, and schottisches and waltzes and huapangos.

Flaco:              I think so yes. Because in his kind of style of playing, it gives it a little taste of Bohemian or something like that.

Chris:               Oh yeah except the way you guys did it by putting in a change in tempo and changing your key, too. That was really very clever.

Chris:               Have you ever come across much of corridos that deal with sort of political things here? Like either marches when they had that thing going to Austin, about 10 years ago. That’s probably before your time or something. Or any problems between the Anglos and the Mexican population. Have you ever encountered any story-songs like that, like corridos?

Flaco:              Right. The corridos that we recorded is just like corridos from……. Mexican styles or like this one here, Jacinto Trevino.

Flaco:              Yes. There’s a lot of those kind of people. Some of them are good. Or we can always polish them up so they’ll come out good. But we’ll take any kinds of subjects, because people they’ve got ideas. The only thing is that they’re not known. We’re still looking for them.

Chris:               Maybe there was one, because when I spoke Narciso Martinez a couple years ago down there, he said he played a lot for Czech people in Corpus where he grow up apparently. Did you grow up here in San Antonio?

Flaco:              His name was Patricio Jimenez, but in that time there was no recordings. Just recording from the capital of Mexico, but not locally here.

Chris:               That’s interesting if he played accordion because it apparently goes a long ways. I wanted to find out something about the different accordions. I think when you hear norteño music you can tell right off that that’s what it is. It’s a very specific sound. How do you get that out of the accordions? Is there any way you can tell me of, what makes it sound like that?

Flaco:              No. You can always, well I have an accordion repair shop here so I know quite a bit of accordion. You can always get those vibrates that vibrates on a little part you know? It’s a different, you can tune them in different keys. At least I can do it.

Chris:               How would you accommodate that? Would you sometimes have two accordions. Like if you wanted to play a song in a key that’s not on the instrument you’ve got in your hand.

Chris:               You like to mix up. The thing that always amazes me and I’m very happy to see it is that, despite the fact that you live so close to the American culture, like rock and roll music and all that, you people have pretty much stayed apart and kept your own music. How do you think that happened? What do you think gave you the strength to kind of stay your part?

Chris:               Have you traveled anywhere else amongst Spanish-speaking people? Have you been to California or places like that?

Flaco:              Yes. I’ve played in California. My own, I just recorded an album with Doug Sahm in New York. I’ve recorded with guys from California, but not in California. I recorded in Florida with Louie and the Lovers and with Doug. Like I say, I like all kinds of music.

Flaco:              Like I say, every accordion player I like. The ones that I prefer they play kind of an old style, like old rancheras. I’m referring to Los Alegres de Teran. They’re my favorite. Naturally they’ve got another style. Now Ramon Ayala he’s pretty darn good. I’ve heard a lot about him and in my point I think he’s the best.

Chris:               Can you recall any particular accordion player who changed kind of from that? Like your father he played a much more flowing style and all of a sudden there was a very staccato style came in. It was much snappier than norteño. I don’t know if I can express myself right. You know, much stronger accent, much fast note. Like your father played the much more European-style maybe. Can you recall any particular musician who changed that sort of thing?

Flaco:              Because he’s more of a progressive kind of accordionist. In that time when my father was recording and all, he modernized the kind of type-playing, not just the old-type of playing. He modernized it and my father used to play just in 2-row accordions. When Valerio Longoria came in, he had a 3-row accordion which it’s more easy to get more keys and all, to make it a little more progressive. He was the one that made it.

Chris:               Some people tell me that norteñ o music and country and western is really the same kind of music.