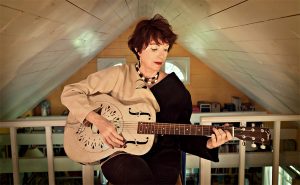 Ann Allen Savoy, a native of Richmond, Virginia, moved to Louisiana in 1977 and began photographing and documenting Cajun music and Cajun musicians. Cajun Music, A Reflection of a People-Volume I of this series appeared in 1984 and won the prestigious Botkin Book Award.

She also wrote the chapter on Cajun and Zydeco in the book American Roots Music, Rolling Stone Press, as well as authoring numerous articles and historic CD booklets on Cajun music.

Ann is primarily known as a musician and is a four-time Grammy nominee, for her duet album with rock star Linda Ronstadt, for her Cajun tribute album Evangeline Made, and for two of her albums with the internationally known all-woman Cajun band, The Magnolia Sisters.

She has produced award-winning albums for the Vanguard, Arhoolie, and Valcour labels. She has appeared as a musician in two major motion pictures: The Divine Secrets of the Ya Ya Sisterhood and All The King’s Men.

Ann has traveled the world over playing music with her husband, musician and accordion builder Marc Savoy in their bands The Savoy Doucet Cajun Band and The Savoy Family Band as well as traveling with The Magnolia Sisters and Ann Savoy and Her Sleepless Knights.

Today she lives on the Louisiana prairie on the seven-generation owned Acadian homestead of the Savoy family where she continues to write, photograph, play music, entertain, and generally live a rich life.

Return to the Ann Savoy Collection