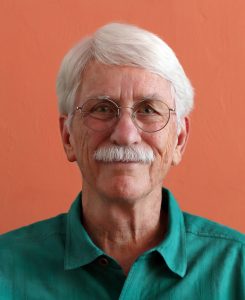 Bob Stone is an independent folklorist and photographer based in Gainesville, Florida.

During his tenure with the Florida Folklife Program from 1990-2010, he traveled throughout the state documenting the traditional culture of Floridians—one of the most ethnically diverse populations in the United States.

In 1992, Bob began documenting  the vibrant African American steel guitar tradition of the House of God, Keith Dominion and the Church of the Living God, Jewell Dominion in 1992.  The cassette/booklet album resulting from his first survey of the music, Sacred Steel: Traditional Sacred African-American Steel Guitar Music in Florida, was licensed by Arhoolie Records and released as Arhoolie CD450 in 1997.  Working with Arhoolie, he produced seven more CDs in the “sacred steel” series and directed the Sacred Steel documentary video for the Arhoolie Foundation.

Bob is the author of Sacred Steel: Inside an African American Steel Guitar Tradition, University of Illinois Press, 2010, and Can’t Nobody Do Me Like Jesus!: Photographs from the Sacred Steel Community, University Press of Mississippi, 2020.

In 2011, the Florida Department of State honored him with the Florida Folk Heritage Award in recognition of his outstanding achievements in documenting and presenting the folk arts and folk artists of Florida.  His documentary photos have been shown in numerous exhibitions, including the National Museum of African American History and Culture, and published in Newsweek, The New York Times, Forum, Wooden Boat and other print media.

Bob also documents and presents Florida’s rich and unique cattle ranching culture. He conducted extensive field documentation and served as co-curator for the large traveling exhibition Florida Cattle Ranching: Five Centuries of Tradition, which has been viewed by more than 600,000 visitors from Florida to Nevada.  He edited the exhibition catalog published by the Florida Cattlemen’s Foundation, has contributed more than eighty feature articles to the Florida Cattleman magazine, and has given more than sixty presentations on the subject throughout Florida.