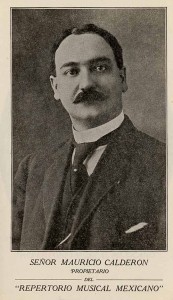 Repertorio Musical Mexicano was the first store in Los Angeles to cater directly to the musical needs of the Mexican community.  In a 1918 newspaper advertisement, they declared:

“Mexicans: This store was established exclusively for your patronage. No other place could serve you better because we, in a word, treat you like Mexicans and Compatriots.1″

Their elaborate catalogs featured everything from 78 RPM records to phonographs to musical instruments. Their sticker could be found on all the 78s they sold (see image gallery below).

According to Pedro J. González, Calderón was in charge of everything in Los Angeles that related to Mexican music. He recruited talented musicians by advertising in the Spanish-language press, and kept an ear out for the latest musical trends among the city’s performers and audiences. Not only did Calderón make money by serving as a go-between between American companies and the Mexican artists, but he also held a monopoly on the area-wide distribution of these recordings through his store. A standard practice of the time for such businesses was to sell phonographs as well as records, and stores such as Calderón’s profited as well from these items. In fact, Calderón’s store, located at 418 (sic) North Main Street near the Plaza, regularly promoted itself by using a loudspeaker mounted in front on the store playing the latest corrido. A small group of men regularly stood in front of the store, listening intently and enjoying the music. (Sanchez 183)2

It was at Repertorio Musical Mexicano where the original members of the famed Los Madrugadores first met. The Sanchez Brothers (Jesús and Victor) went to the music store in hopes of getting on the radio. There they met Pedro J. González who was just starting a new radio program. The brothers got the job, were invited to have free room and board at González’s home, and by 1933 Pedro J. González and the Sanchez Brothers were recording for Columbia Records as Los Madrugadores.3

Thanks to Philip Sonnichsen who provided  his research on Repertorio Musical Mexicano and Mauricio Calderón and sent a translation of Calderón’s obituary from La Opinion, June 4th, 1945

All images, catalogs, and 78 rpm records from the Arhoolie Foundation Frontera Archive.