For Women’s History Month, we honor the music and stories of extraordinary women in the Arhoolie family.

As musicians, singers, documentarians, tradition bearers, and organizers, these women have made immense contributions to the ongoing preservation and vitality of American roots music. This month, we celebrate their accomplishments and invite you to do the same. 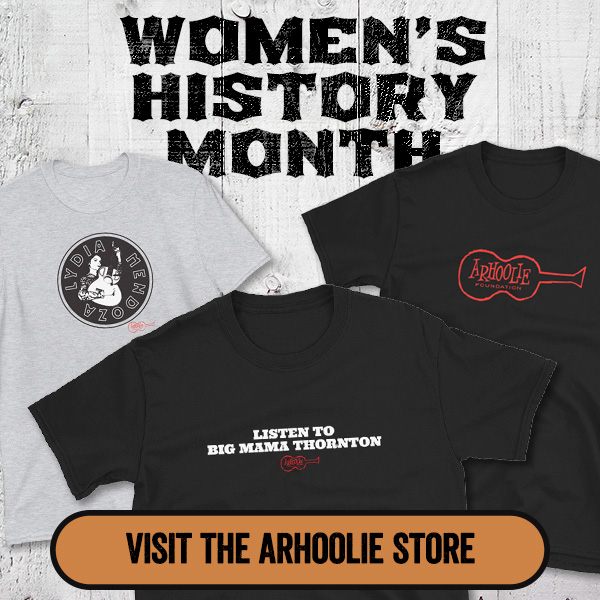 The Creole Belles are an all-female band who celebrate the music of southwest Louisiana. Formed in Berkeley in 1995, the band has become a fixture of the San Francisco Bay Area’s Cajun and Creole scene, known for their driving, fiddle-and-accordion sound and exciting live performances. Featuring Delilah Lee Lewis on fiddle, Maureen Karpan on accordion, Karen Leigh on guitar, and Karen Celia Heil on bass and fiddle, the band released their self-titled debut on Arhoolie in 2008. With a guest appearance by Creole accordionist Andrew Carrière, the album showcases the Belles’ spirited style and decades of deep immersion in the Cajun, Creole, and zydeco traditions. Here they are performing “La Robe Barre” at their record release party at the Ashkenaz in Berkeley on February 2, 2008, with special guest Suzy Thompson on fiddle and vocals. ” – ©Arhoolie Foundation

Rose Maddox (1925-1998) was one of the great pioneer women of country music. Born in Boaz, Alabama to a poor sharecropping family, she grew up in migrant camps around Depression-era California, where her family chased the fruit harvests and found work wherever they could get it. When they weren’t working, the Maddox family played music. Rose and her brothers began performing on KTRB in Modesto in 1937, and by the early 1950s were the hottest country band on the West Coast. In 1959, Rose signed with Columbia and embarked on an extraordinary solo career, releasing five LPs (including the first-ever bluegrass album by a woman) and recording classic duets with Buck Owens and Bill Monroe.

With a voice as vivid as her colorful Western costumes, she was equally at home in rockabilly, bluegrass, Western swing, and gospel. Along with Sara and Maybelle Carter, Kitty Wells, and a handful of others, Rose helped open up the country music field for women. Now you can listen to a 1987 interview and hear the stories from Rose and her brother, Fred.

Hear the interview and see our amazing gallery of pictures.

Barbara Dane performing “Brother Can You Spare a Dime?”
with the late guitarist John Lumsdaine at Down Home Music in February 2010.
©Arhoolie Foundation

Barbara Dane is a living legend and one of the most singular figures in the history of American music. A celebrated blues, jazz, and folk singer for more than 70 years, she is also an influential social activist, record producer, maverick, and general troublemaker.

Barbara’s career reads like a Who’s Who of American popular music. Since the late 1950s, when jazz critic Leonard Feather described her as “Bessie Smith in stereo,” she has shared the stage with Lightnin’ Hopkins, Pete Seeger, the Chambers Brothers, Muddy Waters, and countless other luminaries. In the 1960s, she became deeply involved in the civil rights and anti-war movements and was the first American musician to tour Cuba after the Revolution.

In 1970, she deepened her involvement in social activism by founding the influential protest music label Paredon Records with her husband Irwin Silber. Through it all, Barbara has remained a beguiling performer and one of our finest interpreters of American blues, jazz, and folk. As a vital voice and a fierce advocate for a better world, we honor Barbara Dane this Women’s History Month 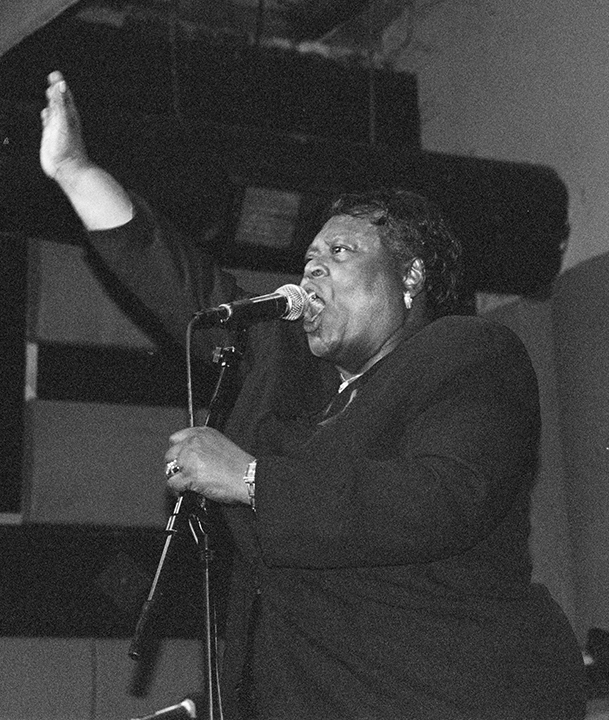 Katie Jackson is a celebrated Baltimore-based gospel singer who appeared alongside the Campbell Brothers on the 1997 Arhoolie release Pass Me Not. Known as the “Mahalia Jackson of the Keith Dominion” Pentecostal church, her passionate and powerful singing has made her one of the most highly regarded vocalists in the sacred steel tradition. A first cousin of Little Richard, Katie was born in Columbus, Georgia and moved to Baltimore in 1958 to sing lead with the Baltimore Echoes, a popular gospel group of the era. She later recorded and toured the United States and Europe with the Campbell Brothers for several years. In a 1997 interview with folklorist Bob Stone, Katie shared fascinating insights into the role of the steel guitar in the Keith Dominion church. You can hear the entire conversation and learn more about Katie’s career on our website.

To see more rare pictures
and videos from the Arhoolie Foundation Collection,
sign up for our newsletter.