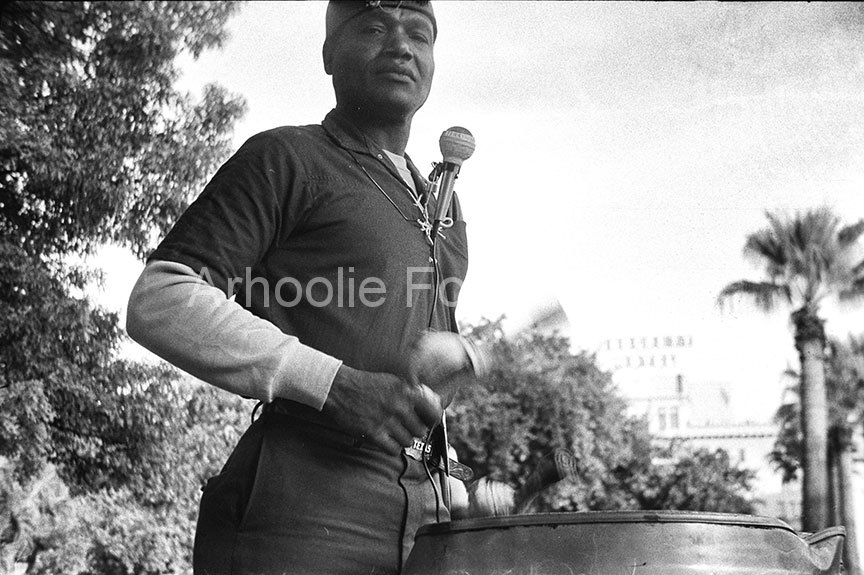 “If you can have an influence to cause people to see on a level, you can get yourself out of a situation, and when you get out of the situation you don’t have to worry about somebody else trying to connive or scheme a way to throw you right back in it, because you’re out of it truly. You ain’t out of it through scheme.” – George “Bongo Joe” Coleman, (November 28, 1923 – December 19, 1999)

In this brief interview Bongo Joe is not very talkative; however, he does reveal a few glimpses into his creative personality. 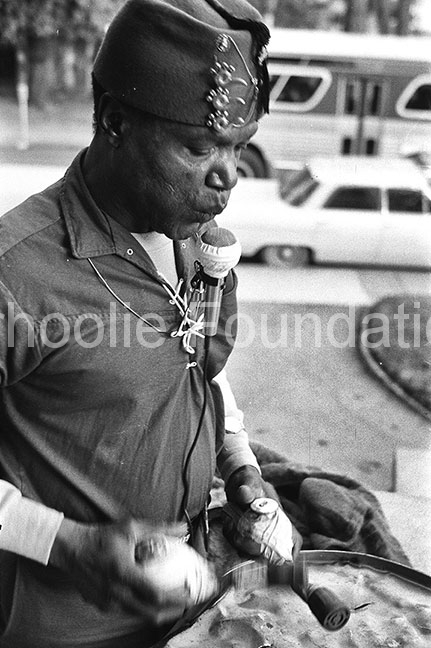 See below photo gallery for a transcript of the interview

Larry Skoog:    You told me that you were born in Florida was it? You have to say yes so they can get it. I can’t record a nod, George. When?

Larry Skoog:    Born and raised there?

Larry Skoog:    Where did you first start banging on the drum, on the can there?

Larry Skoog:    In Houston? What gave you the idea for it?

Bongo Joe:           Just trying to get a job as a drummer, and I couldn’t get the job unless I had my own drums. I tried to make a loan from several sources to buy drums. ….. my first job, and couldn’t get the money so I got some cans and fixed them up like drums and started playing on street corners in Houston.

Larry Skoog:    When was that?

Larry Skoog:   I see these Jamaican guys beating on these things. Did that influence you, or did you think about that at all?

Chris Strachwitz:        Did your parents or anybody in your family ever play music?

Larry Skoog:    So it was just something you sort of felt like doing then. I imagine you knew you had a talent for it.

Bongo Joe:           Mm-hmm (affirmative). I always did like the rhythmic-type music, such as xylophone, piano, drum. Anything you bang on, that’s what I always liked.

Chris Strachwitz:        Did you get most of your songs by just observing people?

Larry Skoog:    Making them up?

Larry Skoog:    Well, they’re pretty good songs. Is there one thing or another that you particularly like to sing about?

Larry Skoog:    Do you use the songs to tell-

Larry Skoog:    He’s going to play something. You’ll hear him. And don’t worry a bit about them, because we told them they could stay up and listen.

Larry Skoog:    You can make it as loud as you want. What about … What did you do for a living before you started banging on the drums?

Chris Strachwitz: Have you played lately at all?

Larry Skoog:    You just sort of travel around and find a place-

Larry Skoog:    Try to stay in one place. You said you’d lived in Houston for a while, then Galveston, and then Fort Worth.

Bongo Joe:           Yeah. I’d go to Houston for the winter. That went on for about six or eight years, and then I started going to Fort Worth. That lasted about five years. I was considering Galveston as home base.

Larry Skoog:    Until they built the old folks’ home.

Chris Strachwitz:        You made too much noise for them, or what?

Larry Skoog:    Driving the crowds out.

Larry Skoog:    And down there, that’s just when people are getting started down there.

Chris Strachwitz: Have you ever gone back to Florida, the beaches there, played there?

Larry Skoog:    Oh. You mean the civil rights stuff and things like that?

Larry Skoog:    Just thought it wasn’t going to be a little too wild down there, or thought that you couldn’t say what you wanted to say?

Larry Skoog:    I can understand that.

Chris Strachwitz:        Have you thought about going to California?

Chris Strachwitz:        Do you have any strong feelings about things that you feel you want to express?

Larry Skoog:    I know your songs always deal with the human condition, how people treat each other.

Larry Skoog:    Really? In other words, the demonstration is the proof. When you do it, and do it well, that’s what the whole thing is about.

Bongo Joe:           Sometimes a demonstration can prove … I don’t want to say prove, but verify or signify not only what you can do, but what you want it to be placed.

Larry Skoog:    Yeah, how you feel about it.

Bongo Joe:           Because you have to be around a thing at least seven straight days in order to estimate that, and you got to know something about the field to be able to do that behind the seven days being around it.

Bongo Joe:           In other words, you can sense the way a guy plays if he’s a real musician. I ought to say, first you got to be a real musician from the inside through what you can remember and exercise and coordinate, and I might use the term cooperate too. A lot of that goes in.

Bongo Joe:           In other words, you observe a musician for about seven days, if you’re pretty well-equipped for knowing things, you sense the way he plays under the circumstances. See? You can pretty well tell from that.

Larry Skoog:    You see him in different situations and how he performs and what he does with it.

Larry Skoog:    Who would be some of your favorite musicians?

Larry Skoog:    Yeah, the guys that are really trying to do new, and yet solid, jazz.

Bongo Joe:           That is the newness. What makes it new is originally from wherever it comes from right then.

Larry Skoog:    That’s right. It’s not just trying to mix any different. Because then anybody make it.

Larry Skoog:    That’s right. That’s a good observation, in fact. That’s going in the notes. I know what you mean. I noticed in your songs, George, the ones that I’ve heard so far, a couple I heard last night and the ones that I heard down in Galveston and the ones I heard on that record that Mac made, the ones I heard today, you seem to like to talk about man and how man is treating each other and the relationships between people and this sort of thing, and I think you do it beautifully.

Bongo Joe:           If you can have an influence to cause people to see on a level, you can get yourself out of a situation, and when you get out of the situation you don’t have to worry about somebody else trying to connive or scheme a way to throw you right back in it, because you’re out of it truly. You ain’t out of it through scheme.

Larry Skoog:    That’s right. It’s an honest thing. That sort of sums up the way I feel, that all your songs are talking about things like that. Honesty, like that song you sang today about the little dog.

Larry Skoog:    That was … That made an impression on my children.

Chris Strachwitz:        Yeah, they remembered it.

Larry Skoog:    There’s something … They say a person that’s got a poetic spirit can talk to the wisest person in the world, and to the smallest children, and I think there’s something valid in that because there’s something about truth that reaches all levels of people. I feel that way, anyway, and that’s the way that song-

What do you use in your coffee, George? Anything? Take cream or sugar?

Larry Skoog:    I can’t offer you Benzedrine I got a some good bourbon. I got the rest of that wine.

Larry Skoog:    And I got cream and sugar.

Larry Skoog:    I feel the same. The sugar kind of gets in your throat, doesn’t it?

Larry Skoog:    Oh, I see. I’m bothered with the same complaint. I got eight different kinds of pills. Eight. I’m not kidding.

Bongo Joe:           No, I better not get no food in my mouth. No food. I can’t whistle with it. You ever see anybody try to whistle with a soda cracker in their mouth when they chewed it up?

Speaker 5:       You really get a total picture of San Antonio down there on that Alamo Plaza, don’t you?

Larry Skoog:    Tell you, every kind of people walk by that place, don’t they?

Bongo Joe:           Can’t just rig up a set pattern like you would a bucket of water and pour it on them and expect them to drink it.