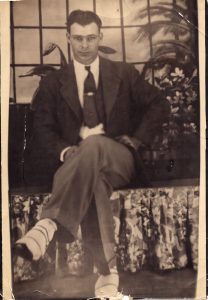 Though I never personally met Austin I had heard him play at the Evangeline Club in Eunice. Marc and I stopped in one Sunday afternoon and entered a pitch black room, freezing cold due to the air conditioning. The music was rocking and the dance floor was packed. As usual Austin had a great band-Allen Ardoin on fiddle, Cabris Meunier on steel, Jesse Ray Fontenot on guitar, T-Black Aucoin on drums, and Austin on accordion. Austin is credited with teaching Dewey Balfa how to play Cajun fiddle double string style when a young Dewey came to play in his band.